In order to choose the Grand Prize and Honorable Mention winners for Screenplay Festival, there are three rounds to the competition. In the second round, every script is read by at least two more judges in addition to previous readings. The screenplays with the highest ratings move on to the final round! The scripts listed below deserve recognition as Screenplay Festival Finalists.

The most frequent question we get asked is, “What percentage placement does being a Finalist make me?”  This year, Finalists represent the top 20% of entries that we receive.

We appreciate everyone’s hard work and would again like to congratulate everyone for their great writing!

10 Minutes From Paradise by Janyce Lapore
As Long As The Sun Is Shining by Marc Lucas
Battle Cries by Karen Walker
Beating Vegas by Jason Fisher
Birthmom by James Hsiao
Bleed Just Like Us by Ezekiel Walker
Darwin Rising by Richard Geiwitz
Day of the White Rabbit by Liz Tabish
Deep East Texas by shaun ireland
Funny Accent by Barbara Shulgasser-Parker
Hard Promises by Barbara Bianchini
In The Game by Jason Fisher
Italians Without A Cause by Lucia Braccalenti
Katharine to Tesla, Faithfully Yours by natalie paige bentley
Leviathan by Kristie Dickinson
Lost in Control by Maria Massei-Rosato
Modern Miracle by Jonathan Mendelson
Oh, Baby by Panda Landa
Pastor Dash by Pearse Lehane
Rust by Guy Pooles
Second Chance Feature Film SCRIPT Project by Tina Batten
Second Impressions by Mike Anderson
The Big Con by Vanessa Ryan
The Greek Girl’s Story by Alan Singerman
The Last Great Ankle Contest by June Escalante
The Love Poems of a Professional Torturer by Leigh Hunt
The Ortons by June Escalante
The Other Christmas List by Kristie Dickinson
The Steagles by Jeanie Clark
The Subtle Art of Being Human by Tristan David Luciotti
The Walk-Offs by Will Berry
You and Me and Elvis by Jimmy Barden 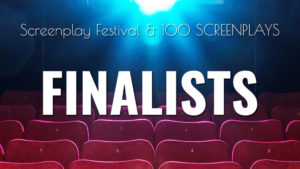